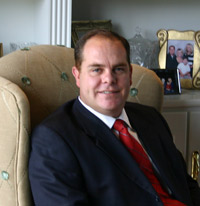 Kevin is a fourth generation funeral director and embalmer.  He graduated Crittenden County High in 1991 and received his diploma from Mid-America College of Funeral Service in 1993.  Kevin worked for his parents, Terry and Sandy Gilbert, at Gilbert Funeral Home upon graduation from high school.  In 1995 Kevin moved to Franklin when the family purchased the Booker Funeral Home.  In 2011, Kevin and his brother Britt purchased the Portland Funeral Chapel in Portland, TN., Britt runs the day to day operation at Portland while Kevin will assist him when needed.  Kevin is a member of the First Baptist Church in Franklin and Kentucky Funeral Directors Assc.

Kevin enjoys spending time with his family and playing Golf.

Kevin married Kimberly Smith in 1999 and they have two children Brittanie and Alex. Kim is a licensed funeral director and licensed cosmetologist and is co-owner of Salon G in Franklin, KY.